It is hailed as the best way to get fit, with celebrities including Kim Kardashian and Katie Holmes purporting to be fans.

High intensity training – or HIIT as it is known –  is a form of strength training that involves the repetition of short bursts of activity or weight training. 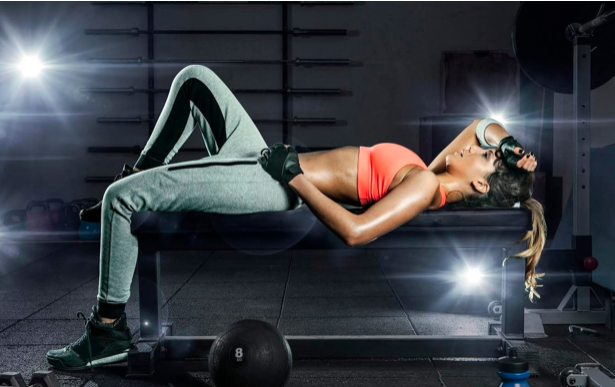 But, if a person isn’t accustomed to this form of exercise, the workouts could be doing more harm than good, experts have warned.

They revealed exhausting high intensity training can increase a person’s risk of heart disease and cancer.

Study author Dr Robert Boushel, of the University of British Columbia, in Canada, said: ‘If you’re new to going to the gym, participating in high-intensity “sprint” classes may increase your performance but might not be healthy for you.’

High intensity workouts are said to be able to burn up to 1,000 calories in an hour.

But alarming findings, published in the Federation of American Societies for Experimental Biology Journal, suggest that those new to the fitness regime could end up endangering their health.

The study was carried out in a dozen male volunteers in Sweden, all of whom were in good health but self-identified as untrained or only moderately active. For people who aren’t accustomed to the work-outs, high intensity training can increase the risk of heart disease and cancer, and also weaken the body’s ability to fight off harmful free radicals

The men participated in high-intensity training over the course of two weeks that involved repeated 30-second all-out sprints, followed by rest periods.

The Canadian and European scientists found signs of stress in the muscles of non-athlete, untrained participants after ultra-intense leg and arm cycling exercises.

Additionally, those people also had a weakened ability to fight off rogue tissues tied to aging and tissue damage after their workouts.

They analysed tissue samples from test subjects – and found that their mitochondria, the powerhouse of cells, were only firing at half-power after training.

That reduced their ability to consume oxygen and fight off damage from free radicals.

Dr Boushel said: ‘Our study raises questions about what the right dose and intensity of exercise for the average person really is.

‘We need to be cautious about supporting sprint training in the general population.’

The scientist explained that seasoned athletes and those who are well-trained have built up antioxidant enzymes in their bodies to protect against free radicals.

For beginners, Dr Boushel recommended starting slowly and gradually increasing intensity over time, under the supervision of a trained professional or kinesiologist.

The potential long-term adverse effects of high-intensity training are unknown, but the scientists are continuing to study different levels of exercise to measure the dosage of training against different biomarkers for health.